A Polish fashion brand is doing what it can to break up the chaos on the border as refugees stream into the country from war-torn Ukraine. The company produces unique, easy-to-spot hooded capes for volunteers working on the ground with refugees at the border crossing in Medyka, Poland.

The project is a collaboration between RISK Made in Warsaw and Belarusian-Polish artist-activist Jana Szostak. RISK is used to making statements with its designs: in 2014, The Times of Israel reported on the new brand’s bold Jewish pride line, prominently featuring Jewish symbols and sayings printed on sweatshirts gray and other sportswear.

Co-founded by Antonina Samecka and Klara Kowtun in 2011, RISK came up with a prototype cape and is currently producing dozens of these garments for Stewardesses of Peace, one of many volunteer groups working with refugees in Ukraine. flock to Poland. More than 1.4 million refugees have entered the country, according to the United Nations.

The designers use one of RISK’s existing prints for the capes. The print, titled “Dreamworld,” resembles abstract clouds in calm blues, grays, greens, and browns.

“It’s our most popular design, but it’s not clouds. These are the contours of the continental masses, with the idea of ​​a world without borders. You can easily spot the Norwegian coast, for example. We were inspired by the lyrics of John Lennon’s iconic song ‘Imagine’,” Kowtun explained.

The print has been transferred to thick sweatshirt-like material for the hooded capes, which can easily fit over the heavy winter jackets needed for the region’s late-winter freezing cold. The designers added three colored stripes: two on each of the sleeves and one on the front zipper. They represent the flag of Ukraine, the flag of Poland and the red and white flag used by opponents of the Lukashenko regime in Belarus.

“That last flag was important for Jana, because she’s from Belarus,” Kowtun said.

This is the third collaboration between RISK and Szostak. Samecka and Kowtun had previously designed a red and white dress for Szostak, which she wore to protest the Russian-aligned government of Belarus. Szostak also commissioned a custom-made dress from RISK made from material printed with the photographs of 2,000 prisoners of the Lukashenko regime, which she wore at a major gala.

RISK has set up a special section of its e-commerce site devoted to Ukrainian aid. The company will donate 50 złoty ($11.50) from the proceeds of each item sold from its “Wolność” (Freedom) line to Polish Humanitarian Aid’s “SOS UKRAINE” campaign.

During a Zoom interview with The Times of Israel, Kowtun turned his computer camera to show how RISK’s offices, on the second floor of his store in Warsaw, are transformed into a comfortable shelter for 10 adults and several children.

“It should be ready by tomorrow. We are partnering with the JDC on this,” Samecka said, referring to the global Jewish humanitarian and relief organization, the Joint Distribution Committee. 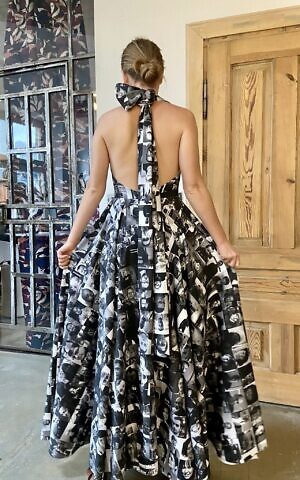 Activist and artist Jana Szostak wears a dress she designed with clothing brand RISK Made in Warsaw. The print on the outfit is made from photos of 2,000 political prisoners from the regime of Belarusian President Alexander Lukashenko. The dress was worn at a grand gala. (Courtesy of RISK Made in Warsaw)

Samecka and Kowtun are also working hard to accelerate the launch of a new campaign developed in cooperation with Russian-Belarusian-Polish educator and activist Marina Hulia which they originally planned to unveil in April for Passover, Easter and Ramadan. The campaign, RISK for Real People, features refugees and immigrants from Chechnya, Kazakhstan, Ukraine, Russia and Afghanistan modeling RISK designs.

“We invited these people to do a photo shoot, and a lookbook of the photos should be up on our site very soon. We realized that we had to strike while the iron was hot, while the hearts of the Poles are open at the moment,” Kowtun said.

Samecka explained that the campaign aims to send a message that everyone should be welcome in Poland and that a united and multicultural Polish society is desirable.

“Poland is not a very tolerant country. We want people to look carefully at people who come here and give so much to Polish society, and who deserve to be welcome here,” said Samecka.

Like most businesses, RISK has suffered setbacks during the COVID pandemic. Kowtun and Samecka had big plans to expand the brand internationally in 2019 and 2020 after attending trade shows in Europe and New York. They were supposed to go to China in 2020. 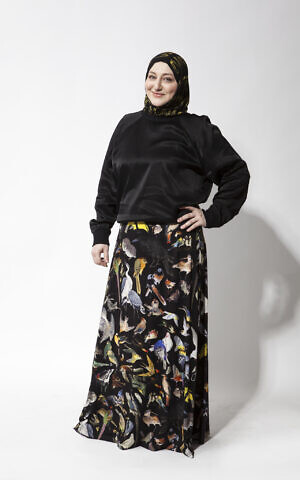 An immigrant in Poland is a model for the “RISK for Real People” campaign. (Irek Kamieniak)

The brand has come through the past two years continuing to have strong online sales. RISK is known for its soft, comfortable and lightweight jersey materials. Fabrics are used for all their creations.

“There is no doubt that the dress code has changed due to COVID. But our clothes are comfortable like a tracksuit, but also fashionable. People could wear our clothes when they’re stuck at home, and both feel good and look good,” Kowtun said.

When RISK launched a decade ago, it only sold items – from hoodies to prom dresses – made from heather or gray fabric. The brand then branched out and added prints to its repertoire, including flowers from Poland, birds from Warsaw and still lifes.

“We’re not just talking about the gray hoodie anymore. We realized that we and everyone else needed color in our lives,” Kowtun said.

If so, we have a request.

Every day, our journalists aim to keep you up to date with the most important developments that deserve your attention. Millions of people rely on ToI for fast, fair and free coverage of Israel and the Jewish world.

We care about Israel – and we know you do too. So today we have a question: show your appreciation for our work by join the Times of Israel communityan exclusive group for readers like you who appreciate and financially support our work.

You are a dedicated reader

We’re really glad you read X Articles from The Times of Israel over the past month.

That’s why we started The Times of Israel ten years ago – to provide discerning readers like you with must-read coverage of Israel and the Jewish world.

So now we have a request. Unlike other media, we don’t have a paywall in place. But since the journalism we do is expensive, we invite readers to whom The Times of Israel has become important to support our work by joining The Times of Israel community.

For just $6 a month, you can help support our quality journalism while benefiting from The Times of Israel WITHOUT ADVERTISINGas well as access Exclusive content only available to members of the Times of Israel community.

Thank you,
David Horovitz, founding editor of The Times of Israel